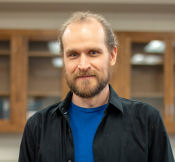 The following is a guest post by Ian Stoner, whose story “Eight Lacunae” appeared in Issue 16 of Typehouse.

Listeners who came of age in the era of streaming services and mp3s have largely missed out on a small pleasure of physical media for recorded sound:liner notes. It was once standard practice, when labels re-issued an important album, for them to commission a short essay from someone close to the band situating the recording in its musical and cultural context. The genre has a style—the best liner notes are so dense with in-group references and proper nouns that they can be difficult for most readers to unravel… and yet the band’s story emerges, the warmer for its insulating layer.

“Eight Lacunae” (from Typehouse Issue 16) is a short story told through liner notes, and in its opening paragraph I try to establish the insular style characteristic of the form. Amassing sufficient detail required research, supported especially by Simon Reynolds’s Rip It Up and Start Again: Postpunk 1978-1984 and Alex Reed’s Assimilate: A Critical History of Industrial Music. Those books, and the trove of resources they cite, helped me imagine a specific musical context for my narrator to inhabit. Nearly all the context was then burned away in the process of compressing the opening paragraph to the density of liner notes.

For this guest post, I thought it would be fun to reverse that compression and show my work. Below, I’ve annotated a mixtape (read: youtube clips) of bands and songs referenced, directly or indirectly, in the opening paragraph of “Eight Lacunae.”

The Buzzcocks – Boredom (1977)
The Buzzcocks were an early punk band, notable for excellent songwriting and for establishing the Do-It-Yourself aesthetic central to punk and post-punk of the late 1970s. When they were unable to find a label willing to finance or distribute their music, they borrowed the money to record the “Spiral Scratch” EP and founded their own label to distribute it.

Depeche Mode – Dreaming of Me (1981)
Daniel Miller was a DIY early adopter outside the punk scene. Under the name The Normal he self-financed and distributed a 7-inch single featuring “Warm Leatherette,” a relentlessly repetitive synthpop number based on a J.G. Ballard novel. He included his home address on the sleeve and was inundated with demos from bands who didn’t realize that Mute Records wasn’t an indie label, but rather some rando’s bedroom. Miller (eventually) seized the opportunity, signing oddball genius Frank Tovey, who performed under the name Fad Gadget. Miller and Mute Records went on to sign hugely successful global acts, including Depeche Mode.

Iggy Pop – Sister Midnight (1977)
Joy Division’s debut LP, Unknown Pleasures, is a masterpiece. Ian Curtis, who had epilepsy and was known for a dancing style difficult to distinguish from seizure, was their singer. He killed himself in 1980 while listening to Iggy Pop’s “Sister Midnight.”

Clock DVA – Sensorium (1981)
Cabaret Voltaire’s recording studio in Sheffield was home to multiple foundational industrial bands, including Clock DVA and the first incarnation of The Human League. These bands were known for synthesizers, minimalist arrangements, and meticulous attention to detail.

Prince – When You Were Mine (1980)
Prince released Dirty Mind in 1980, cementing the Minneapolis Sound. Given his amoeba-like absorption of New Wave, I can imagine Prince fans mining the local scene for bands that could plausibly fit that description.

Ian Stoner teaches philosophy at Saint Paul College and writes fiction when he can. His website is http://ianstoner.com/ .