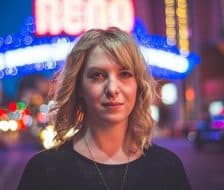 The following is a guest post by AnnElise Hatjakes, whose short work “A Diminished Chord” appeared in in issue 19 of Typehouse Literary Magazine.

The first time I read Kurt Vonnegut’s Slaughterhouse Five, I was too young to really understand its commentary on war, trauma, and violence. Rather than analyzing the work’s thematic ambitions, as my English assignment required, I could not stop thinking about what the book did in terms of craft. I had read other works of speculative fiction, but those books seemed to follow a clear set of rules, rules that dictated how the worlds of the novels operated. What Vonnegut created did not seem to abide by any rules at all. Once Billy Pilgrim becomes “unstuck in time,” all bets are off.

Creating a fully developed world can require pages and pages of subtle exposition. When I was workshopping my speculative novel in graduate school, I was frequently asked for more details about the parallel universe I’d created. While I was revising, I kept worldbuilding because I thought that would make it feel more “real” and would answer questions that could be distracting to readers. What I realized, though, was that the more details I added, the more questions readers had. As soon as I got into the nuances of the economic structure, which runs on a new form of cultural capital, readers asked about how taxation would work, whether this new form of wealth could be transferred, and how exactly people could earn more capital.

For my story in Typehouse, which is a retelling of Nathaniel Hawthorne’s The Scarlet Letter, women have literally been silenced and marked by a tattooed “A.” I spent a long time reading medical journal articles about vocal cord paralysis, and in my first draft, that research materialized in about two hundred words explaining the procedure of severing one’s vocal cords. After doing so much research, I felt like I needed to include that research to lend a greater sense of authority to the story. In the second draft, I did the opposite. I tried to take out as many of the details as I could while still giving the reader enough information. The narrator explains, “This morning, you make a cup of green tea from the stash that you secreted away last week. The flavor is sharp, and you have to take your time because since they severed the nerve to your vocal cords, swallowing has posed problems.” Rather than explaining the actual procedure, I chose to focus on the character’s experience of that procedure’s aftermath.

While I originally believed that only a novel could capture the intricacies of a different world, whether that’s a space opera or a dark fantasy, I now believe that flash fiction can do the same on a different scale. It provides enough space to pose a “what if?” question and allow the reader to contemplate the possible answers. For me, the key is not to get caught up in the minutiae of the fictional realm that’s been created.

A native Nevadan, AnnElise Hatjakes holds an MFA degree in fiction and a master’s degree in writing from the University of Nevada, Reno. She lives in Reno, where she teaches English at a public high school. One of her stories was shortlisted for the Neil Shepard Prize in Fiction. Her work has also appeared or is forthcoming in journals including Juked, Tahoma Literary Review, and Typehouse, among others. She is currently completing revisions on her novel and will be attending the University of Missouri in the fall to earn her PhD in creative writing.