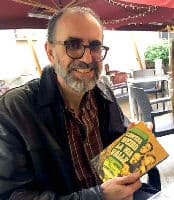 The following is a guest post by Fabio Lastrucci, whose artwork appeared in in issue 18 of Typehouse Literary Magazine.

If a straight line is the shortest way to join two points, an arabesque is certainly the most imaginative. This example could perhaps explain the blurred logic of my artistic experience, a journey studded with changes of direction that took me far from the typical path and led me to discover fascinating destinations and new creative skills.

You don’t have to be (or believe you are) a new Leonardo Da Vinci to operate on several different dimensions. Everyone can do it if they do not stick to preconceived notions of success, or too rigid of plans. In my case, this choice to remain open to change was due to necessity, creative hunger, and not being someone who likes to say “no”.

Growing up between the canvases and brushes of my father, a professional painter, I had an early interest in drawing and painting. I nurtured other strong passions such as comics, science fiction, film and television, but without thinking these passions could become future professional experiences.

In 1987, at the end of my degree course in painting at the Academy of Fine Arts, I joined the “Lanterna magica” theater company. The group commissioned me to design a graphic novel based on their successful play, La Guerra di Martin Senzasperanza Scemo Legale, thus starting a collaboration as a graphic designer.

The teaching of the great playwright Francesco Silvestri, who introduced me to the theatrical scene and its language, led me to open my horizons from painting and comics to set design and sculpting, where I learned to produce masks and muppets. For a young man looking for work, like me, it was exactly what I wanted. The training in painting proved very useful in this new field, and in a short time sculpture and SPFX became a full-time occupation. I joined forces with other associates in professional studios such as Golem Studio, Metaluna, and Forme. My team, based in the outskirts of Naples, specialized in the processing of foam rubber, latex and fiberglass, working for the main Italian theater and broadcasting companies.

The work was very engaging and full of challenges. At the same time I couldn’t resist cultivating an interest in creative writing, which culminated a few years later in the play “Racconti salati,” (a double-meaning phrase that means both “stories with salt” and “intelligent stories”) a children’s comedy about the new legends of the sea interpreted with actors and puppets and performed in the Dohrn Station, the Liberty Aquarium of Naples.

The variety of works in the theater asks us to develop eclectic expertise and to look for new creative impulses. With friends Fioravante Rea and Delfina Autiero, we opened a long chapter dedicated to the study and production of video clips ranging from directing to screenwriting and special effects production

This winding path has returned me to my roots, to a renewed interest in comics and illustration, working with Italian and American magazines.

I remind myself that in these times, facing our current crisis, art represents confidence and hope in a future. Change feeds the soul. New projects, new targets are both a price to pay and a prize for every artist. What will be the face of the next, unforeseen goal to be achieved?

Fabio Lastrucci, after graduating at the Academy of Fine Arts in Naples, has worked for more than twenty years as a sculptor/scenographer for major television networks, opera and prose theatre, and from 2012 to the present he returns to the figurative arts with his brother Paolo (group Nuages–morbidi approdi) exhibiting in solo and group exhibitions. As a cartoonist and illustrator since ’87 he has been drawing comic books (“La guerra di Martin”. “Esodare incerto”), collaborating with advertising agencies in Campania and since 2016 he has been producing comics, illustrations and covers for Italian quarterly (Ronin, Sherazade) and American magazines (Perihelion Sf, Shenandoah, Metaphorosis, Bards and Sages, etc.).
As a writer from 2000 to today he publishes numerous short stories and from 2014 novels, essays and anthologies mainly in the field of the fantastic. He collaborates with Italian literary magazines (Rivista Milena, Delos SF) and foreigners – science fiction magazine Teoria Omicron (Ecuador).
https://www.behance.net/fabiolastra2ab
http://www.isfdb.org/cgi-bin/ea.cgi?275986
https://morbidiapprodi.wordpress.com