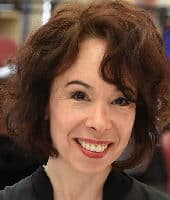 The following is a guest post by Pamela Stutch, whose short story “Badass” appeared in Issue 18 of Typehouse.

During the summer of 2018, I had the opportunity to follow one of my favorite instrumental hard-rock bands. It was a chance to view a successful group up-close, devoid of any glamour. I became especially friendly with the band’s bassist and only woman in the entourage. She told me about driving around the country in their van, the equipment and luggage jammed in the back, for weeks, even months on end, and how the other band members relied on her for everything from hotel reservations to paperwork for the next gig. But she liked it, she said. They had been a band for twenty years. A family. She had never thought about doing anything else.

One evening, before the set, I encountered her in the ladies room.

“They can’t even order their own meals,” she said in an irritated tone, referring to the other band members. She plopped her knapsack on the floor with a thud and put her hands on her hips. “I had to take it all down on a napkin and bring it to the kitchen or else we wouldn’t have eaten tonight.” Then she added sheepishly, “I don’t mean to complain. It just gets to me sometimes.”

Inspired by her, when I returned home I began to write a story about a traveling rock band and its only female member. When I brought the piece to one of my MFA workshops, however, I quickly saw that it didn’t work.

“These people are too nice,” my instructor said of my characters. “Think of a middle-aged punk band with Joan Jett in it. Think of a woman who won’t take shit from anyone getting very sick of her life.”

I came back to the piece with a different perspective. I rewrote it again and again, imagining my protagonist on stage, braced with an attitude, and her bandmates jaded, crude, and much different than they were in real life. I bent, shaped, and stretched my characters way beyond their original boundaries. To depict the culmination of my narrator’s frustration, I conjured up a modern-day female Jimi Hendrix who uses hairspray instead of lighter-fluid to torch the band’s equipment. The story “Badass,” which appeared in Typehouse Issue 18, resulted from those efforts.

By coincidence, the evening I found out that “Badass” had been accepted, the band I had followed was scheduled to play at a nearby club. I greeted the bassist at the end of the show and excitedly conveyed the news about the upcoming publication.

“I don’t know what to say.” She grinned, her eyes shining in the post-show club lights. “I’ve never been the inspiration for a story before. I’m flattered.”

I promised to send her a copy and she hugged me. As I left the club and walked to my car, I felt a renewed sense of gratitude for the perseverance to struggle through the writing process, as difficult as it is, and bring stories to life.

Pamela Stutch received her MFA from the University of Southern Maine’s Stonecoast MFA program. Her stories have appeared in Typehouse Literary Magazine and Five on the Fifth. Another story will be published in The Woven Tale Press later this year. She is currently employed as an attorney and lives in Scarborough, Maine, with her husband, son, one cat and one dog. Photo credit Matt Jones.