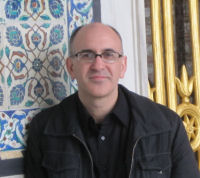 The following is a guest post by Vincent Salvati whose story “The Fire” appeared in Issue 11 of Typehouse.

My story, The Fire, was inspired by an event that took place in August of 1891 to my great, great-grandfather. James Murphy and his seventeen-year-old son of the same name spotted a fire in the distance and set out to investigate. Living close to the railroad tracks, they walked down them in the direction of the smoke. As they were crossing High Bridge, the son noticed an approaching train and alerted his father. It is unknown why the elder Murphy did not follow his son to another track. But regardless of the reason, he remained where he was, and the son witnessed his father’s horrible death. My great, great grandfather was forty-three years old.

While my story is just that–a work of fiction, I have always been intrigued by this event that ended my ancestor’s life and surely traumatized his son and the rest of the family. His seventeen-year-old son was the oldest of eight children, the youngest still in her mother’s belly. That unborn baby would become my great-grandmother. She was born in March of 1892–a full seven months after her father’s death. There are so many facets of this story that I do not know. Did he kill himself? Was he drunk? Did he even know his wife was pregnant? I have tried to research, with no luck, the fire to which they were heading. That mysterious blaze has always intrigued me.

Like much of my writing, I used a particular incident as a stepping off point and let my imagination take over from there. The fire became my central focus, and I allowed it to lead me through the creative process of investigating what the fire would mean to an individual or the family, as well as how it would affect them. Additionally, I wanted the deadly train event to play a role. The era was also important to me and one I often consider. The period prior to and just after the turn of the twentieth century is rich with oral histories I recall being told as a child. By mixing these elements together, I was able to satisfy my storytelling appetite while paying respect to the past.