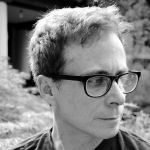 The following is a guest post by Jim Naremore, whose short story “The Bleeder” appeared in Issue 12 of Typehouse.

I’m a compulsive note taker. I think all writers should develop that as a habit. When I get into that wonderful place of creativity, it can feel like I’m a kid again, running through backyards on those never-ending summer evenings, chasing ideas and observations like fireflies, and a trip to get coffee can be like a trip to the Paris flower market for inspiration: a line of dialog, a character, a setting, a mood, a description, whatever. The novel I’m currently wrestling with came from piecing together three of those random single-sentence thoughts I jotted down at different times.

I try to carry around a notebook. I say “try” because Inspiration seems to get bored and gets its jollies by sneaking up on me when it sees I’m unable to write something down easily. Because of this, my notebooks also tend to be stuffed with random bits of paper torn from things or folded bank deposit slips or some such scrap of ephemera, with cryptic messages scribbled in the margins. I’m currently working on three of them, small pocket-sized things. What goes into them is usually no more than a single sentence or a fragment, sometimes just a single word (I run across some really killer words). My novel takes most of the ink, but I have ideas for new short stories and bits of potential poems and even character names scribbled in those notebooks.

Sometimes I’m forced to carry the idea in my head until I can get someplace and do something with it. This is like carrying water in your hands across a busy street. I cannot tell you the number of fantastic ideas I’ve had that I’ve lost. I know I had them. I have no idea at all what they were. In fact, I remember distinctly having the last line for my novel drop from the sky on me one day in the car. It was exquisite, but I have no idea what it was now.

Then there is the note that is now meaningless to me. As an example: written on the bottom corner of a page full of plot outlines and other good thoughts is a small note: “HIT IN THE CHEST WITH A JELLY DOUGHNUT!!!!”

That’s all it says.

I try to go all Sherlock Holmes on it and deduce the meaning by looking at the other notes I wrote around it with the same pen (pens are like flirtations in a crowded bar… they come and they go…), but nothing around it in that blue ink makes it any clearer. It’s got four exclamation marks. Obviously at the moment I wrote it down I thought this was genius. But now, I’ve got nothing.

I cast my mind through the great mental rolodex of characters I have created, searching for one who either would find being hit in the chest with a jelly doughnut to be a moment of great personal transformation or growth… or who at least deserves it. I get nothing. Taken from the other end; who have I written that does doughnuts? Who is the potential lobber of said doughnut? No one comes to mind.

A different angle perhaps? Was I thinking of doing memoir? I do recall being hit in the chest with a tuna sandwich once. Here, I am certain, is the naissance of the note. But a tuna sandwich is not a jelly doughnut. It doesn’t take much postmodern literary criticism and deconstruction to see that the underlying essential artistic gestalt of a jelly doughnut is not that of a tuna sandwich. Its like orangutans and goats.

So, there it sits: the jelly doughnut note. I run across it periodically when I’m going back over my notes, combing for good ideas when I’m stuck or looking for a new direction to take, or just the right line or phrase. I’ve never come to a point where I’ve said: “Eureka! Lay that doughnut upside his chest!” It’s like a needle in a haystack I keep finding, over and over again. Normally I’m pretty possessive of my ideas, most writers are I think but you need someone to be hit with a jelly doughnut? Be my guest.