Val lives and works in the Pacific Northwest where they write and works on their plans for world domination. They enjoy reading submissions of all types, and the variety of pieces they review always keeps them on their toes. You can visit them at  valgryphin.com.

T. E. Wilderson is a New Orleans-born, Midwestern writer. Her work has appeared in The Opiate magazine, The Ekphrastic Review, The Roanoke Review, The Louisville Review, Crack the Spine, and the Notre Dame Review. She has just completed a novel and is at work on a short story collection. You can follow her at @MizGolightly.

Yukyan is based in New York, NY, but is thrilled to have a literary connection to the Pacific Northwest. She loves reading and writing all forms of prose, particularly creative non-fiction and short stories. Like most of her favorite writers, she believes that the boundaries between literary and genre fiction are (largely) rubbish. She funds her creative impulses by working for a non-profit on environmental health and social justice. Follow her @yukyan_etc.

KC Snow counts “surviving teenage homelessness” as her MFA. She does not see the best in people, and early adopters of her worldview include Dark Mountain, Elm Leaves Journal, Crab Fat Magazine, The Blotter, and several anthologies. Snow is the writer and a co-host for the climate change comedy podcast Maximum Carbon Sinkhole.

Kameron Ray Morton is an MFA candidate in fiction at Columbia University. Their prose has appeared or is forthcoming in Carbon Culture Review, FLARE: The Flagler Review, and Valparaiso Fiction Review, among others, and their chapbook Intersections was a finalist in Paper Nautilus’s Debut Series Chapbook Contest. They feel pressured to drink less coffee, but find their best ideas emerge from a caffeine-induced high. Find them on Instagram @tallsoyflatwhite or online at KameronRayMorton.com.

Hailey Hanks lives in Nashville, where she earned a BA in writing and political science from Belmont University. Her fiction has received the Sandra Hutchins Writing Award, the Ruby Treadway Creative Writing Award, and the Alfred Leland Crabb Award. Currently, she is a teaching assistant and MFA fiction candidate at Western Kentucky University. She lives with her wife and four-legged babies Spiderfish, Mayor Augustus Maywho, and Chloe.

David Midkiff is a poet, educator, and freelance writer who finds himself living abroad in London for the near future.  When he is not writing, David is usually teaching high school students, experimenting with a new ingredient in his cooking, exploring a new city with his partner, or doing something active outdoors.  David’s poetry has appeared in “Windowcat” by bighugpublishing and “Resistentialism” by Poetastard Press.  He published his first chapbook “EdotGdot (The Way I Would Have Said it the Second Time)” in 2016.  His forthcoming collection is entitled “Dead Metaphors”.

Jiwon Choi is a poet, teacher and urban gardener. She teaches preschool at the Educational Alliance, a multi-generation non-profit located on the Lower East Side of NYC. She is also a long-time urban gardener and membership coordinator for the Pacific Street Brooklyn Bear’s Community Garden located near Downtown Brooklyn. Her first book of poems, One Daughter is Worth Ten Sons, was published by Hanging Loose Press in 2017. She lives in Brooklyn, NY.

Alan Perry is a Minnesota native who received his BA in English from the University of Minnesota.  He was nominated for a 2018 Best of the Net, and his poems have appeared in Heron Tree, Sleet Magazine, Gyroscope Review, Right Hand Pointing, Zingara Poetry Review, and elsewhere, including several anthologies. He and his wife divide their time between a suburb of Minneapolis, Minnesota and Tucson, Arizona.

Amy Scanlan O’Hearn is a newly retired high school English teacher. Embarking on this new phase has happily brought her to Typehouse, to a recent gig teaching creative writing and to the simple luxury of sleeping past 5:00 am and reading and writing all the day long. When not at her desk or laptop she’s walking or biking the trails of Southern NJ or traveling with her husband to the keys for time in the sun or to Seattle for time with her son, Dylan. She received her MFA from Rutgers University and her stories and poems appear in PerContra, Helen, Bacopa, Verseweavers and Mom Egg Review.

Kevin Lichty is a writer and teacher living in Phoenix, Arizona. Before moving to Arizona, he was a copywriter for the National YoungArts Foundation. His work can be found in Yemasee, Ponder Review, Hawaii Pacific Review, Palooka, and elsewhere. He was a semifinalist for the 2017 William Wisdom Novel-in-Progress award.

Kate is a recent graduate from Salisbury University, where she earned her BA in English. She works as a professional writing consultant and freelancer, and aims to work for a good publishing company one day (as well as adopt a cat). When she’s not being an adult, she enjoys knitting/crocheting, pixel art, poi (fire) dancing, and web design. She favors character-driven stories with plenty of tension and banter, but if you really want to impress her, format your dialogue correctly and/or consistently.

Trish grew up in Philadelphia. She received her B.S in Systems Engineering from the University of Pennsylvania and her MFA in Creative Writing from Rosemont College. She loves to read submissions that are across genres: literary, speculative, experimental, or just plain weird, mostly looking for characters she can root for or love to hate. Her writing leans toward speculative short stories, but that depends on the mood of the day.

Naomi Stamps graduated from the University of Georgia in Fall 2018 with a major in English. She enjoys writing stories, poems, and articles that all have thoughtful messages for any reader to benefit from. She looks forward to becoming a successful writer one day.

Lily Blackburn is a writer, cyclist and cat-mom living in Portland, Oregon. She studied English and creative nonfiction at Portland State University and graduated in 2017. She writes memoir, flash, and book reviews. For even more juicy details – check out her semi-active blog – “Lonely Rotation” at lilyblackburn.com or follow her on IG @lily_ana_ees. 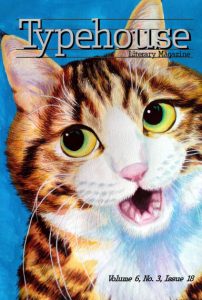 Our current issue is number 18.
Find out more here