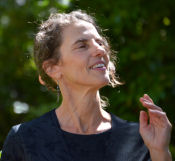 The following is a guest post by Audrey Kalman, whose short story “Ramps Season” appeared in Issue 16 of Typehouse.

A writer tunes in to her vulnerable, interior voice

Recently, I prepared for a public reading by recording myself. I wanted to listen in a more focused way than by simply reading aloud so I could eradicate extraneous words, find phrases that tripped up my tongue, and become familiar enough with the story to keep my eyes on the audience instead of the page.

I cringed as I listened to the recording. I wondered if that’s how the rest of the world hears me. I think I knew the answer was yes, because the two voices—interior and recorded—often sound radically different. And most of us don’t like the recorded one.

The same goes for a writer’s voice expressed on the page. The interior voice is perfect. The tempo of the phrases and the rhythm of the sentences make divine music. Ideas weave effortlessly into intriguing plots. But, captured on paper or screen, the words turn pedestrian. The angelic voice sours. The tone becomes screechy, nasal, or childish. Just as you may hate the sound of your recorded voice, you may hate the manifestation of your voice on the page.

Practicing craft helps, but it’s not the answer. I studied creative writing in college and found myself so tied up in knots trying to conform to my professor’s well-meaning guidelines that my prose sounded like a constipated Jane Austen’s. In graduate school, I fell under the spell of another professor and adopted the voices of some of his favorite authors, meaning that I was a twenty-something female trying to write like Robert B. Parker, Norman MacLean, and Tracy Kidder.

Of course, there’s nothing wrong with emulating the pros as you learn. But eventually you have to speak for yourself.

It took me decades of writing—professionally and for pleasure—to discover my voice. Or, more accurately, to acknowledge and embrace the voice that has been mine all along. Usually, it sounds less than angelic. But it is true, and it is mine.

It’s not easy for us as writers to claim our voices because they are about so much more than sentence structure and tone. They’re about doubt, impostor syndrome, and vulnerability. Claiming my voice has meant accepting that my subject matter will be dark, my sentences long, my characters introspective, and my action scenes sometimes consisting of nothing more than a fraught glance.

Giving stories shape in the world through words is an act of surrender. You have to give up the idea that the words will sound as you hear them in your head, that readers will hear them as you do. You have to listen to the inner voice that already has told a thousand perfect stories, that will never stutter or rise to a nasal honk or crack or throw out a word that drops like a bomb into the middle of a sentence.

There are hundreds of millions of voices in the world. Writers need faith that theirs will be perfect for someone, no matter how flawed it sounds to them.

Audrey Kalman writes fiction with a dark edge about what goes awry when human connection is missing from our lives. Her most recent book, the short fiction collection “Tiny Shoes Dancing,” was shortlisted for the 2019 Rubery Book Award. She is the author of the novels “What Remains Unsaid“ and “Dance of Souls.“ She currently serves as president of the SF Peninsula Branch of the California Writers Club. She is seeking a publisher for her most recent novel and is at work on another. Find out more at audreykalman.com.